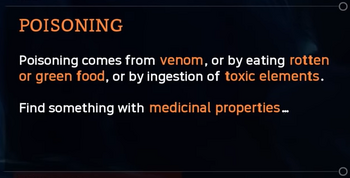 Venom Poisoning is a negative status effect from being bitten or stung by hostile animals.

Venom poisoning will affect your vision depending upon the degree of poisoning. Venom poisoning isn't fatal, this affliction will decrease over time, and can be soothed through certain medicines.

Venom Poisoning will reduce your Stamina and is temporary - that is, if you can avoid getting killed by a hostile threats while afflicted.

Important: Your clan members may suffer from venom poisoning without you noticing, so keep an eye out for visual signs of discomfort!

Stage 1 can result after being bitten or struck one time. This stage tends to appear after neurons have been learned that lessen the effects of poisoning on your hominid. A green filter will cover the screen reducing vision. Even with Stage 1, it is relatively easy and safe to travel.

Poisoned outsiders can be recruited by curing their venom poisoning using medicine.