Edit
This article is a stub. You can help Ancestors: The Humankind Odyssey Wiki by expanding it.

The Big Swamp is a memorable location landmark in the

This area can be found easily on your way behind the The Sister Arches. 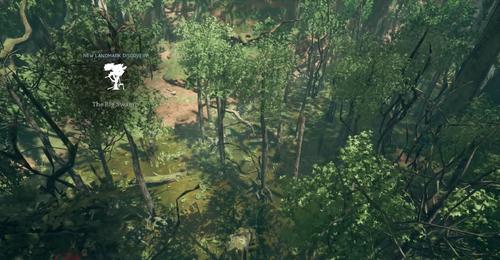 Strangely, the Thorbjarnarson's Crocodile will not spawn in The Big Swamp unless you have already discovered the location .

Giant Warthogs also like to wander into The Big Swamp from different locations often ending in their untimely demise by the Crocodiles. It's unclear if they spawn in this location or not but they still can be a threat. Pay attention so that they don't take your hominid by surprise.

This location has a

Meteorite Site with a

It is unclear why, but the Evolution Feat for the meteorite says Found the meteorite of the Little Swamp site but that isn't the name used for that meteorite like most other meteorites use. It actually is much closer to The Big Swamp than The Little Swamp location. The name appears to be a combination of both locations into "Swamp's" and it is likely an error that the feat says "Little" in the name.

Oddly enough, until you discover this location NO animals will spawn other than Giant Warthogs and

Eastern Green Mambas. This includes the

Community content is available under CC BY-NC-SA 3.0 unless otherwise noted.