The Meteorite is a tool item and weapon.

Where to obtain[edit | edit source]

meteorite is a small piece of iron that falls from the sky when you trigger the event by discovering specific locations in the game. Meteorites can only be found at

meteorite sites scattered across the map.

There are twelve named locations that are meteorite sites.

How to obtain[edit | edit source]

The Meteorite can be

picked up from the small crater it creates when it lands. 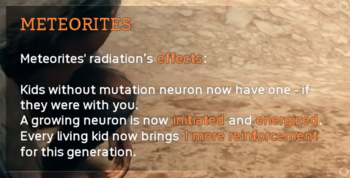 Meteorite sites also induce random genetic mutations in babies that don't already have a mutation. There is a specific set of actions that is required to get these mutations to appear.

Through carefully managing when you discover meteorite sites, it is possible to induce the maximum amount of genetic mutations possible.

Due to the finite nature of meteorite sites, this process of twelve genetic mutations from meteorites can only be performed a limited amount of times per lineage.

The Meteorite is on par with other blunt tools for altering items. It takes the same amount of hits to create rock tools as any other rock like a

Granite Rock or a

Meteorites can also be used as blunt weapons. While not as effective as a

Sharpened Stick, they can still be useful.

A Meteorite can be used in the following ways: