Hard Bone is a tool item and a weapon. 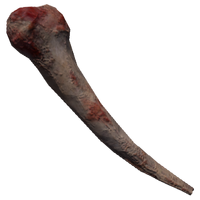 How to create[edit | edit source]

Hard Bone is produced by

butchering certain carcasses. Most rocks or blunt objects can be used for butchering but there are two tools that excel at butchering: a

Basalt Chopper or an

How to obtain[edit | edit source]

The Hard Bone can be

grabbed from a butchered carcass.

Where to obtain[edit | edit source]

How to use[edit | edit source]

The Hard Bone unlike other tools is only useful as a weapon. It is a mix of wood, rocks, and stones weapons. The Hard Bone allows you to have distance from an attacker, they never break, but only cause blunt force trauma. They are a compromise of the best and worst of the other weapons.

The Hard Bone can damage animals, kill them if already badly hurt, and is

Understand that attacking certain big animals with a Hard Bone will lead to your hominid taking damage and negative status effects even with a successful attack:

If you decide to use a Hard Bone as a weapon, you should have plenty of positive status effects or "protections" in place to mitigate any damage that may occur during combat using the Hard Bone.