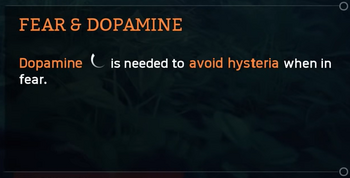 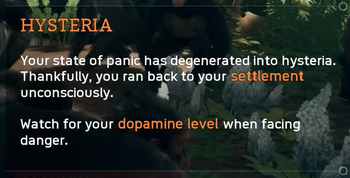 Hysteria - when fear takes over

Fear is a protective reaction to threats. Threats come in many kinds and can be known or unknown. The more fearful you are, the less able you are to control your actions. Fear can induce a state of panic, which makes the character vulnerable to hysteria. Hysteria has the drawback of sending the entire expedition back to their only established

The hominid will be affected by fear in the following situations: whenever a predator or an irascible threat is in the vicinity, or when the avatar walks in the Fog of Fear. 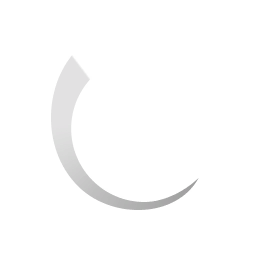 Dopamine allows a hominid to resist the effects of fear. There is a finite pool of dopamine available and is indicated by a curved bar gauge on the HUD.

Dopamine is depleted in fearful situations. The more fearful the situation, the faster dopamine will be depleted, and the more emotional the hominid will become.

Fear negatively influences the dopamine pool. Once the dopamine gauge is depleted, the hominid switches into panic state and runs without the your input. Only steering and jumping will be available at that point. The panic state will persist as long as there’s a source of fear close to the hominid.

If the panic state keeps getting fed by fear, the dopamine gauge will progressively fill up with red. Once the gauge is full, hysteria is triggered and the character will be brought back to its settlement with the rest of the expedition team.

Be aware that the dopamine gauge is shared with the whole expedition team and is not an indication of a single hominid.

Fear changes your emotions. Your emotions indicate the level of threat your hominid currently feels they are in. The higher the emotional level, the higher the threat level.

Your emotions are indicated by a colored eye icon inside the dopamine gauge.

Once you learn the Cognitive Control (CC 01) neuron, it is possible to control the emotions of your hominid. You can choose to be vigilant or alert on command rather than only in threatening situations.

This emotional control is useful because while on Alert status your hominid can run super fast, jump really far, and climb very quickly. Normally the cost for this Alert status is using up your dopamine quickly because a threat is nearby. However, if there are no threats nearby, you won't lose dopamine and can use these enhanced abilities without penalty.

How to stop fear from increasing[edit | edit source]

Not only can you avoid the panic state altogether, you can still prevent hysteria in the event your hominid would panic anyway.

As long as panic hasn’t been triggered, you can refill the dopamine gauge either by

intelligence, grooming another hominid, mating, conquering the fear of the unknown, killing or

intimidating (successfully) an animal, etc. An in-game pop-up says, “Dopamine is gained by doing gratifying activities.” Also, not all foods produce the same amount of dopamine.

Whenever your hominid is panicking, you have to choose between fight or flight. If the panic state is caused by the fear of the unknown, you can steer towards known territory which is represented by a blueish orb. If a predator or an irascible animal caused the panic state, you can flee or take refuge to the treetops (as long as they're high enough to escape from the fear effect). Intimidation and attack are also doable when panic is caused by an animal.

While fear isn't a negative status effect that appears on screen as a small icon, it still causes adverse effects when it is encountered.

Fear of the Unknown[edit | edit source]

When the character moves from their settlement for the first time, the Fog of Fear will appear. If the signs of fear are ignored by you and the hominid goes deep into the unknown, the dopamine gauge will decrease.

In Ancestors: The Humankind Odyssey, the Fog of Fear symbolizes the fear of the distance from the camp and the sense of remoteness that a hominid might get from it[1]. One must think of the fog as a dynamic system bound to the current settlement, and not as a static “capture the territory”-system like the “Ubisoft Towers” popularized by Assassin’s Creed. Each time a settlement is established, a safe zone is created around it. Moving from the settlement’s centre involves a risk to reach the Fog of Fear. The fog is invisible until a hominid reach it. Moreover, once out of the fog, it once again becomes invisible.

The intensity of the fear (dopamine depletion rate) is higher when doing a one-man expedition[1]. Therefore, the intensity is lowered the instant the expedition is a dyad or a group.

While in the fog, the dopamine level will decrease with each movement of the avatar. Conversely, if the character remains stationary, the gauge will act the same. A hominid can still use their

Elders aren’t affected by the fog while babies will trigger a Fog of Fear when they leave the limits of a settlement. 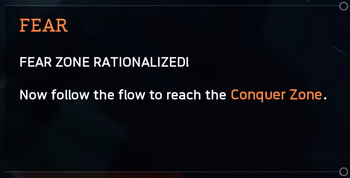 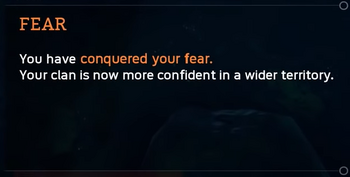 After a few steps in the fog, a blueish orb will appear (usually behind the avatar) to indicate a possible escape route. Escape doesn’t reward you in any way since the fog will have to be lifted at some point.

To conquer the fog, the hominid must rationalize their environment by identifying known

Points of Interest with senses or intelligence. If the points of interest can’t be identified, they won’t contribute to the conquest. Once an adequate amount points of interest have been identified, a pop up will appear stating FEAR ZONE RATIONALIZED and a second orb, white this time, will appear. The character must reach that white orb and press the relevant button to Conquer Your Fear. Completing this action will make the fog back down permanently.

The conquest of the fog also triggers an intimidation event to clear out animals. Conquering in a group (if possible) will provide a more efficient intimidation since it’s likely to affect more animals at the same time.

A third option would be to move the current

settlement at the invisible border, right before the fog gets triggered. Such strategy will have the same and permanent effect of dissipating the Fog of Fear, but the character and their clan won’t benefit from the usual rewards that come with a real conquest.

Fear of the Other[edit | edit source]

A skin-piercing attack (successful) or a successful

intimidation will both partially refill the dopamine gauge.

Conquering the Fear of the Other, like that of the Fog of Fear, will result in a boost of neuronal energy, provided you have kids present.