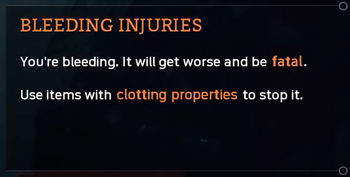 Machairodus. The effect itself is characterized by the hominid in question visibly showing signs of bleeding i.e. red fur, slick spots, spurting blood from wounds.

Bleeding will continually reduce vitality until stopped and will not decrease with time while sleeping or foraging. Not treating bleeding will result in the death of your hominid.

Bleeding also affects the Life Expectancy of a hominid over time and has permanent effects even if you don't die.

Important: Your clan members may suffer from bleeding without you noticing, so keep an eye out for visual signs of discomfort! The Clan HUD will also indicate bleeding clan members with a dull red bar that pulses outwards from the central circle to the clan member that is hurt.

Stage 1 is encountered after being attacked by an animal that has claws and slashing attacks. Actions will take more effort. You can still travel but your hominid will lose life expectancy over time.

Stage 2 only occurs after being attacked twice by an animal that has claws and slashing attacks. Actions will take more effort. You can still travel but Stage 2 drastically lowers the life expectancy of a hominid over time.